Apps, Web Apps and Progressive Web Apps - What Is The Difference?

Hey, pass me those pointy pliers.”

While many of us feel comfortable changing a flat tire, crawling under the dash to put in a new air filter or even doing an oil change (if you’re feeling adventurous), that doesn’t mean we’re all mechanics. First of all, many of us don’t have the exact tools to work on our cars! While pliers, screwdrivers, hammers and wrenches may look similar, and for the most part are interchangeable, when you use an application-specific tool it’s so much more satisfying than a multi-purpose one. Parallels can be drawn to how we use smartphones, tablets and traditional laptops and desktops. We use them every day to access content, services and software - while it may appear seamless across devices, you’re actually interacting with different applications when you check your email on your phone versus when you pull it up on your laptop! That’s because there’s two main categories; native apps and web apps.

What’s the difference between a native app and a web app?

An app, or a native mobile application, is software that is built for a mobile operating system, such as iOS or Android, and installed directly on a smartphone or tablet. Mobile app development is similar to web development in that there is styling, markup and code doing the heavy lifting, but the development environments are different than for websites. Apps are downloaded directly to a device from an app store, after which they can run independently with or without internet access. Examples of mobile apps include many popular social media apps like Facebook, Twitter, Whatsapp, and TikTok along with utilities such as Google Maps, Gmail, and services like Uber, Airbnb, and the list goes on.

A web application (or web app), on the other hand, is a software that is launched through a web browser and runs on a web server, not on your device. Since a web app runs through a web browser, like Chrome or Safari, it requires an internet connection. The user experience can vary from that of a traditional website to a more responsive, mobile-like experience. This means that any device with any operating system should be able to access it assuming there is internet access since the web application is hosted on a server. A web app is essentially a responsive website that loads new information continually.

But are all websites web apps?

Well no, not really. You can spot a static website by simply opening up a page and if it never changes unless you reload the page, it’s probably static.

The line between mobile apps and web apps is blurring. A progressive web app (PWA) is an application that is built like a website and served from the web, but with enhanced functionality that allows the PWA to be accessible even without internet connection, while also delivering a user experience similar to that of native mobile apps. Many services and companies have variants of their platforms as PWAs; e.g. Twitter, Facebook, Google Maps, Gmail and many more. Many services use a PWA to deliver push notifications in situations where you might have poor internet connection.

What good are tools without a toolbox?

Aside from knowing the correct nomenclature and use of specific tools, the most important thing is knowing where they are! A good mechanic has a well stocked and well organized chest (and knows if you used a tool and put it back in the wrong spot!) - similarly, you should have a well-organized workspace. We’ve transitioned away from only having apps on our phones and only installable software on our laptops, into a hybrid space where we use multiple applications across all our various devices on a daily basis. What we’ve forgotten about in that transition, though, is organization (no, those mile long lists of saved bookmarks aren't cutting it).

Services like Desktop.com, which is built as a PWA, offer a novel solution to organizing web apps, links and more, making your experience across devices seamless. Don’t lose a link or miss a notification again!

The story of Desktop.com started with the desire to provide faster and more organized access to the links, tools and web apps that we’re using every day. 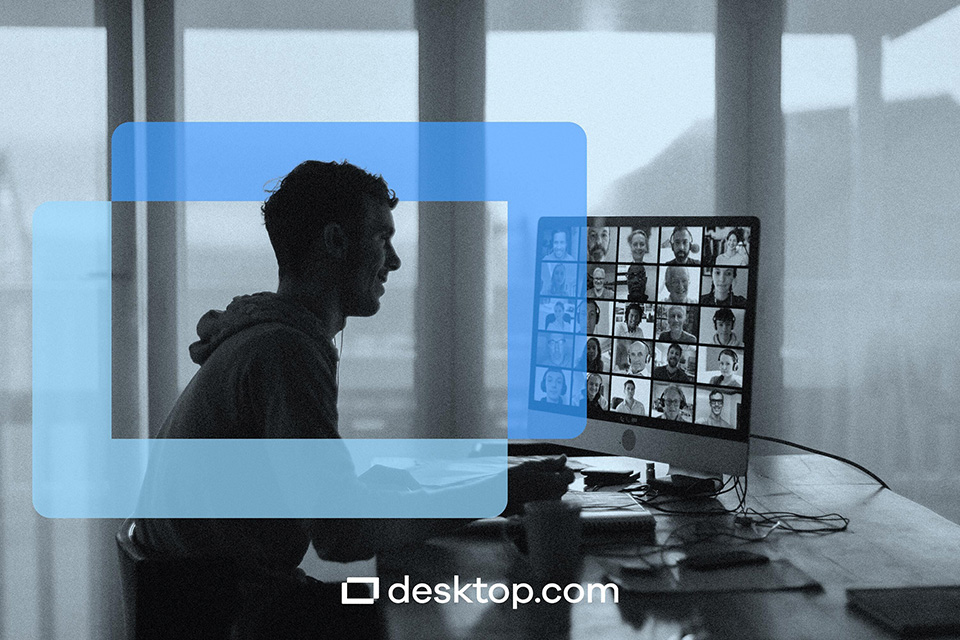 In this particular post, we’ll walk you through the connection between Desktop.com and Google Drive, and how the integration can help your business. 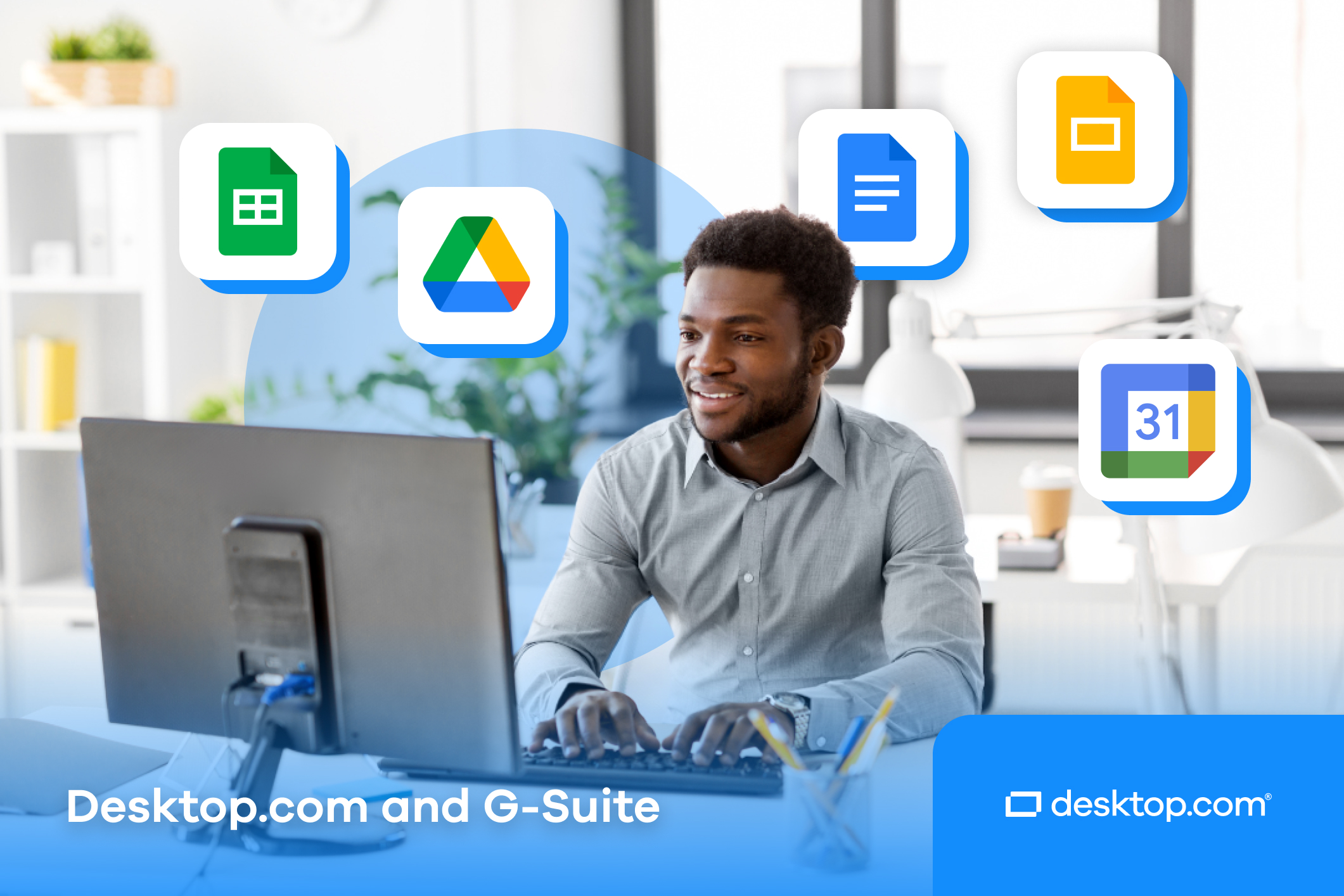 Take a look at a list of the newest updates for Desktop.com in June 2021. 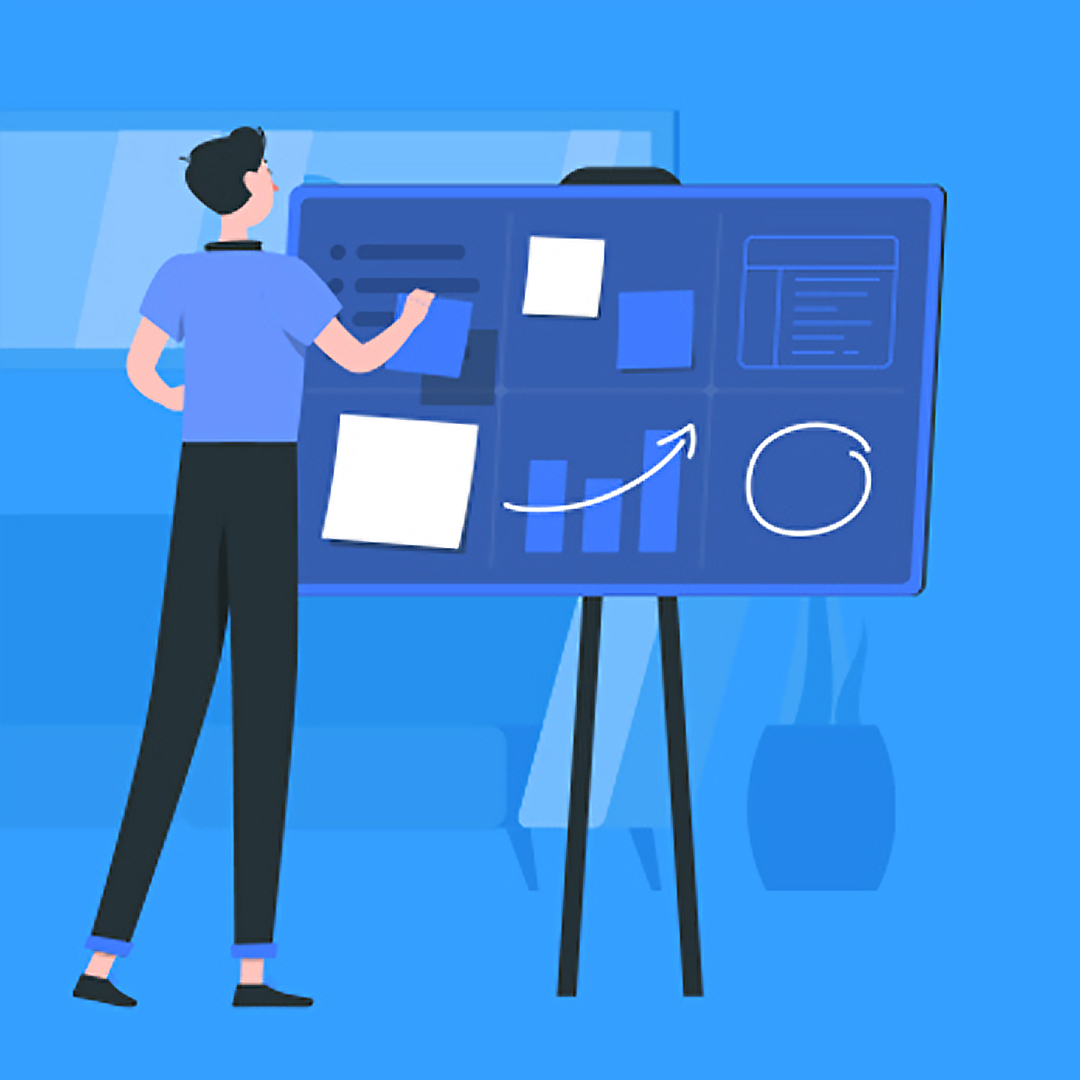 A team bookmark manager allows you and your teams to organize links and bookmarks in any way that makes sense to your business, while being easily accessible from anywhere so that you don’t have to go digging through all those old tabs or resending links for the 100th time! 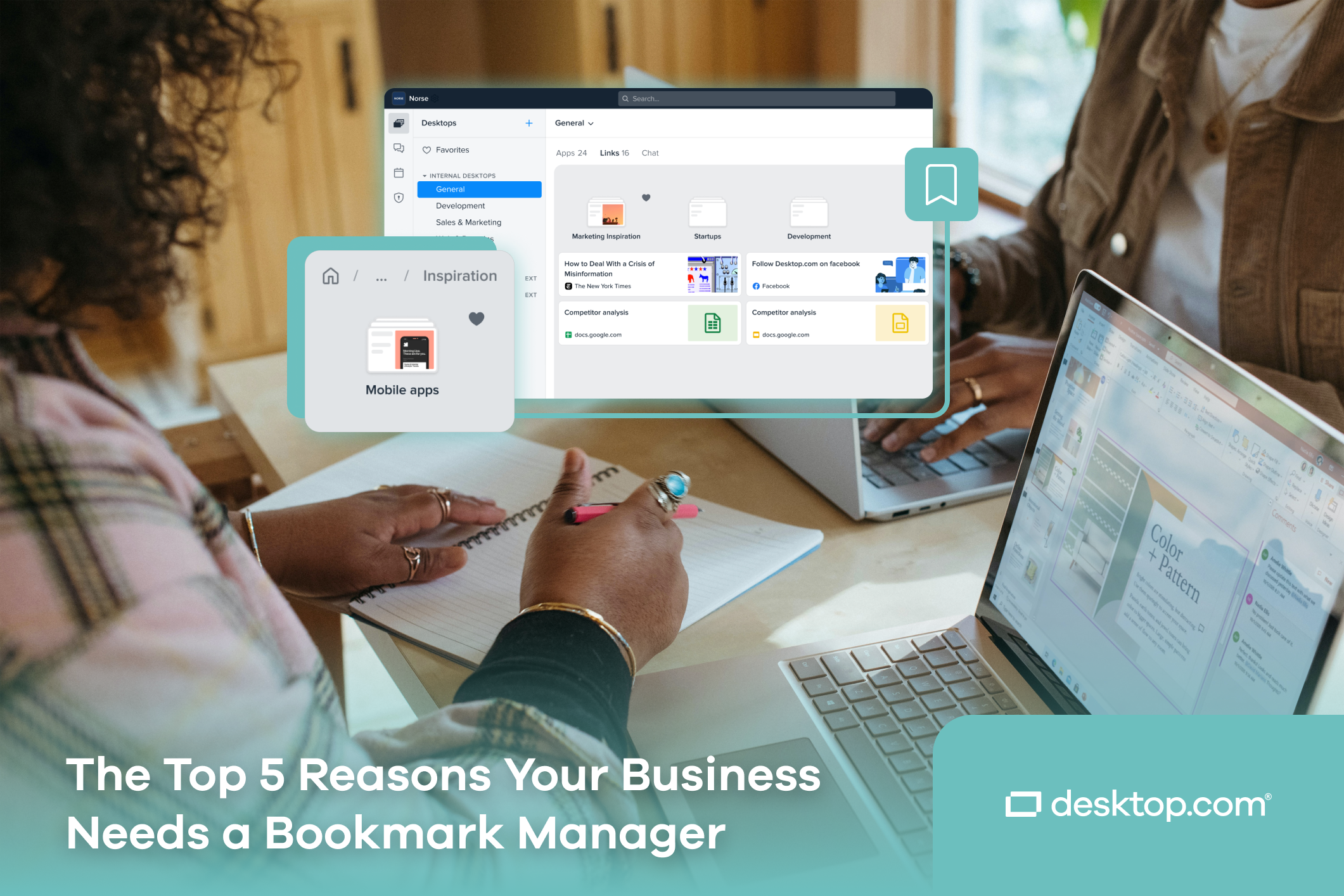 How to Improve Your Multitasking Skills with a Digital Workspace

If you’re managing multiple projects or businesses, the ability to multitask can be vital to making sure everything gets done on time and with maximum efficiency. 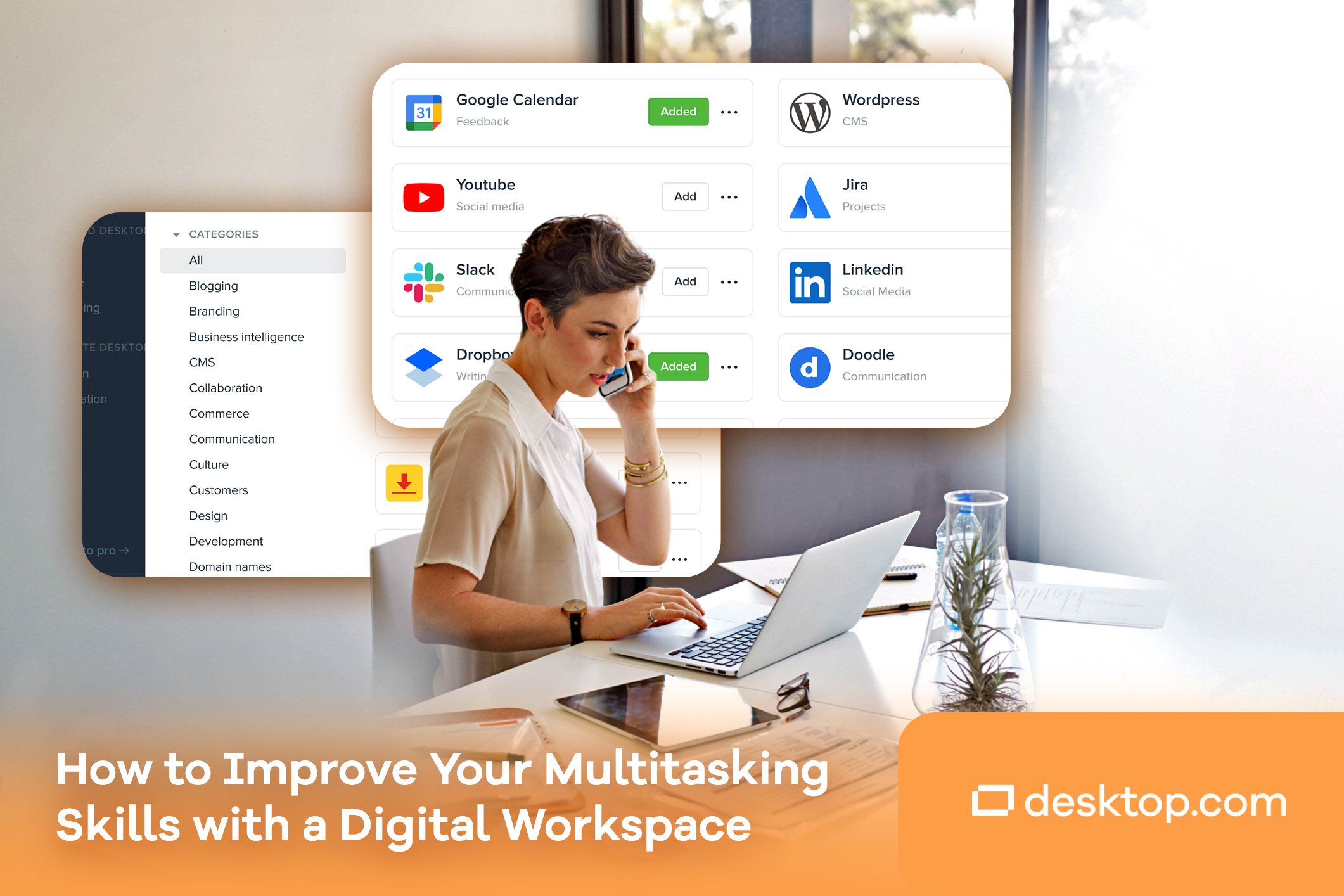